by Akshay Krishna, member of the IITM Aquatics team.

The Madras Sharks, the Aquatics team of IIT-Madras tasted glory in both the men’s swimming and waterpolo events at the 49th Inter-IIT Sports Meet, held at Guwahati from 1st to 4th October 2013. An elated T. Devanathan (Bonus), the captain of the water-polo team, sums up the team’s performance, “We came here on a mission – to get 20 points. We did it, and we did it in style!”

IITM’s waterpolo team completely eclipsed the competition, winning all matches in a dominating fashion. On Day 1, they crushed Delhi 16-2 in their first league match. On Day 2, they defeated the talented but inexperienced Kharagpur team 5-2 to march into the semifinals. In the semifinals on Day 3, they beat Kanpur 8-5, recovering from 0-2 down in the first quarter. This win was particularly sweet for the Sharks as they had not beaten Kanpur at Inter-IIT for six years. The final on Day 4 was a rematch of last year’s, where they faced Bombay. The team played their plan to near perfection, winning by a margin of 7-4.

The victory was a complete team effort, with every individual making a significant contribution. T. Devanathan (5th year CS), as ever, was like a wall in front of the goal. Central defender Deepak Karwa (4th year MM) was instrumental in taking the bite out of opposition attacks. Anand Parikh (4th year ED) swam back and forth tirelessly, supporting attack and defence as the situation demanded. Abhinav Gopal (5th year BT), the legendary centre-forward of the team, led the charge in the front. Not to be left behind was Rudra Naik (5th year ED), whose very presence was a thorn in the flesh of the opposition defence. Krishna Rao (4th year CE), with his speed and agility, was a potent weapon from start to finish. Kartik Tyagi (3rd year ME) rose to the occasion admirably, marking himself out as a player to watch for in the next two inter-IITs.

The men’s swimming team, captained by Anand Parikh, won the overall title, edging out Kharagpur 53 points to 50 in the overall tally. Akshay Krishna (3rd year EP) won all his five individual events in record times. In 1500m freestyle, he beat the old record by over 3 minutes. The team (consisting of Abhinav Gopal, Anand Parikh, Krishna Rao and Akshay Krishna), also captured the first place in both relays, with the icing on the cake being a record in the 4×100m freestyle relay. With the points tally being tied 50-50 between Madras and Kharagpur before the last event on Day 4, Krishna Rao put in an inspired effort in the 50m freestyle event. His 2nd place in that race was his first individual inter-IIT medal and also sealed the title for IIT Madras.

The women’s team was led by Aditi Malpani (2nd year ED). The team’s (consisting of Aditi Malpani, Devika Ghate, Alekhya, Veena Venkat and P.K. Aishwariya) best result was a 4th place in the 4×50m freestyle relay. On the individual side, Aditi Malpani and Veena Venkat qualified for the finals of their respective events. However, their performances fell short of a podium finish. 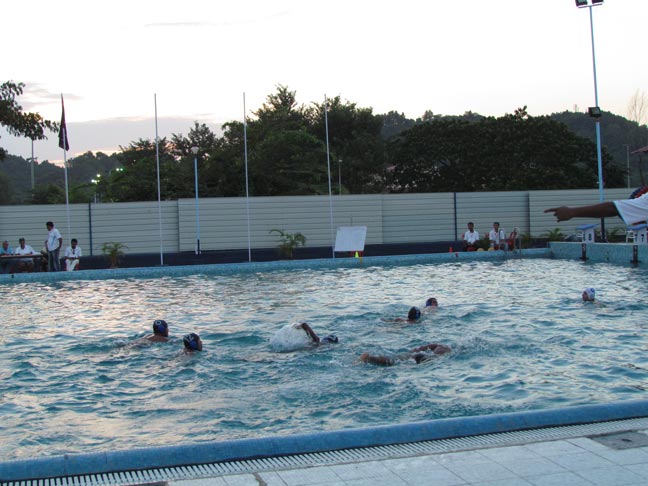 The double victory was the result of intense practice over the last two months by a highly motivated team – travelling to the SDAT pool in Velachery at 5.30 am every morning for a workout before class, and then again in the evening at 5.15 pm, sometimes returning as late as 8.30 pm, owing to bad traffic.  The coach, Mr. Sunny Mathew, a former national level water-polo player himself, was inspirational. In the little over a year he has been with the team, he has taken their game to a new level. The team is also grateful to Mr. Prathap, swimming coach at Velachery, to Dr. K.P. Sudheer, Advisor (Sports), to Dr. Raju, Asst. Physical Education Officer, Dr. Arul, and to Mr. Reddy, who accompanied the team to all practice sessions, of the Gymkhana, IIT Madras, and to all the officials of the Velachery pool for being ever so accommodating.

What the future holds:

The joy of victory was tinged with sadness for the outgoing members of the team. Abhinav Gopal, better known as ‘Tokas’, speaks for all graduating members of the team when he says, “I used to look forward to these four days of Inter-IIT for the whole year. It will take me a while to get used to the fact that there’s no next time for me now.”

With five of the main seven players in the water-polo team graduating this year, next year’s title defence is not going to be a cakewalk. However, the team has a good supply of talented first, second and third years who should stand the team in good stead. Krishna Rao, for whom this was the fourth and final Inter-IIT, sums up the road ahead for the team like this: “When we were in our first and second years, we used to look at our seniors in training, and tell ourselves, ‘I want to be that good someday.’ And we have lived up to the standards they set and have kept the Shark legacy going. Our juniors do not have to look far for inspiration.” The women’s team looks forward to a brighter future too. Most members of the team have at least two years left before they graduate, and can hope for some silverware in the near future.

This was the third consecutive year that the team had to practice at the Velachery Aquatic Complex for want of a functioning pool in the institute. The deadline for the completion of renovation work (28th September 2013) has already passed and, although it is certain that the administration will manage to get it ready by the time IITM hosts the Inter-IIT (October 2015), the team earnestly hopes that it becomes functional well before then. It is absolutely vital for them to have consistent year-round practice, and spending five hours a day on practice in the Velachery pool in the even semester will be impractical.

The Golden Double of 20 points earned in the Aquatics championship (a feat not achieved in recent memory) gives the IIT Madras team a great head start when they travel to Guwahati with hopes of regaining the overall General Championship at the main Inter-IIT Sports Meet in December. Here’s wishing them good luck!