Varun Gangal interviews P. Baranidaran, a former SGS, on various aspects of being a student representative.

What were the perks and responsibilities associated with being The Student General Secretary?

It was a huge responsibility, with lots of behind-the-scenes work. There are things which appear simple, but in reality take up a lot of time. For instance, getting a good caterer – the whole process took 2 months. In my tenure, Basera was under renovation. Each change took a lot of time. As a General Secretary, I had to be present at each and every checking. The SGS is also a member of many boards like the Board of Academic Courses, Board of Students, Board of Academic Research etc. Besides this, there are various committees like the Transportation Committee, which decides bus timings. As a result, an SGS has a lot of meetings to attend. In the process, one understands the way the institute functions. One also gets to know a lot of people, especially the alumni and people from IITM Research Park. However, this is also an added responsibility, as you end up becoming the go-to person whenever these alumni want to arrange something in the institute.

What were the obstacles you faced during your tenure? What compromises did you have to make?

One obstacle I faced was the lack of go-to people to get a task done, since the hostel general secretaries are not answerable to the SGS. Being the SGS took up lots of my time, so I had to make compromises. I had to give up on my project completely in my 9th semester, and could work on it only in the 10th semester. Thankfully, my guide was supportive. Also, I would stay in the Dean’s Office till 8:30 pm almost everyday as a result of some meeting or the other. Even replying to various mails would take up an hour daily. I thus missed out on a lot in my personal and social life. But all the learning was worth the toil.

How do you compare the institute administration with the government of India?

Although I haven’t worked much with government bodies, the institute administration does work similar to how I think a government body would work. A lot of paperwork is involved in every small task. Also, it takes time to get things done.

What is your take on media attention on the institute?

IIT Madras being an institute of national repute, media attention is inevitable. However, I believe certain negative media attention can be avoided if there is more cooperation and communication between the faculty and the students. Many students are unaware of the motives and reasons behind a certain legislation/rule made by the administration. They approach neither the professors nor the secretaries to voice their concerns, and the issue is directly brought to media attention. The media’s perspective being very different, the issue ends up painting the institute in bad light. However, the media must not be blamed for this. In most cases, if the students voice their concerns to the professors/secretaries, they do get addressed. Hence, students and faculty are equally at fault for negative media attention.

Any advice for current and future secretaries?

Having held various positions of responsibility in Shaastra and Saarang, I got familiar with their working. Hence, I assumed that the work involved for an institute-level secretary would be along those lines. However, this is not true, at least for the position of General Secretary. You don’t know what you are signing up for till you get elected. Initially, I would sometimes be unaware of the date/time of meetings. Sometimes, I wouldn’t even know what role I had to play in them. There were also some unforeseen responsibilities- for example, if there was some issue with the Hostel Management employees, I would be summoned as a credible student representative. If someone would make an attempt at suicide, I would have to go to the hospital/police station etc. Such things do not fall under your official responsibilities, but one still has to do them. I became aware of many such things as time passed. It would be really great if the candidates/aspirants for SGS know about the exact job description before applying for candidature.

When I made my manifesto, I was unaware of the intricacies behind many things. Conventionally, these manifestos include a long list of things to be done, provided the candidate becomes a SGS. However, the candidate does not realise that some of those things might take in excess of 2 years to get implemented! There are lots of bottlenecks when it comes to execution. The manifestos must be realistic and the candidates must take these things into account.

Any memorable experiences from your tenure?

Every board meeting in which I made an important decision was a memorable experience. On numerous instances, I had to act as the mediator between faculty and students. In such cases, each party might be justified in its own right, but one has to still reach a middle ground between them. Also, we started the Colloquium, and some of those discussions turned out well.

Also, the CCW was completely against hostel nights and we had to put in a lot of effort to get them approved. The day that happened, I indeed felt very happy!

Besides this, there were other positive developments, such as the SWF (Student Welfare Fund). The GCU’s 24-hour tele-counselling service, in association with Medall was an important breakthrough. Ours was one of the first institutes to have a professional counselling service.

Do you believe that the secretaries could be elected indirectly,perhaps by a body of students and professors? Could the Colloquium itself serve as a platform for the same?

I believe that the SGS and the other secretaries represent the student body and they should definitely be elected representatives. It would be difficult for professors to judge the suitability of students for these posts. Also, an elected secretary is accountable to the people who elected him/her. In case he/she doesn’t work properly, the people who put him in power can hold him up for not doing so, although this rarely happens. Besides, as a secretary, one has to interact with professors on a daily basis, and one naturally gets biased towards their point of view. Having appointed representatives will further increase this bias. Also, many students may not view him as their rightful representative. The Colloquium can serve as an efficient platform for discussion/mediation. Although it is doing well, it can definitely do better.

Any other changes you would like to see implemented in the institute?

I would really like to see the institute have an independent public relations team, similar in structure to T5E. This will help present a coherent and factually correct picture of the events in the institute to the outside world, and would prevent unfortunate altercations with the media and other negative media attention. However, such a body must not biased towards an institute-centric point of view. Incidents must not be covered up because of the fear that they will malign the institute’s reputation.

Another feeling I have is that the post-graduate (PG) students are hugely neglected. Most of the non-academic life in the institute is centered around the undergraduate students. Even the articles covered by T5E are  mostly about undergraduates. Many post-graduate students are depressed and lonely, as they have no life outside the hostel. They also have an inherently uneasy relation with the professors. Also, since the student secretaries are predominantly undergraduates, the concerns of the PG students often get overlooked. I feel that there should be one representative from the UG students as well as the PG students in the administration. If the SGS is an undergraduate, there should be another postgraduate representative too.

Also, I believe that the General Secretaries Council (GSC) which comprises of all the Hostel General Secretaries, along with 3-4 representatives appointed by the SGS and approved by the SAC, is very inactive. It could be utilised much more efficiently, and could act as a forum to raise hostel-specific issues at the institute level. 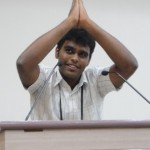 P. Baranidaran (DD/AE/2012) was the Student General Secretary(SGS) for the year 2011-2012. He was a resident of Alakananda Hostel and was fondly called ‘Thala’ by juniors. He currently works at ZS Associates.